Last spring, I had placed a Contest, which ran from 1 March to 30 June 2017, with the possibility of winning this superb set below : a 270mm Japanese hand pruning scissors and a matching leather case with a metal clip, worth €182.

By Facebook, e-mail or telephone, you have been numerous to participate (more of fifty in all), I thank you, it made me very happy …! Several people succeeded in the challenge and won gifts …

The happy winner of the final draw, which took place as scheduled on 30 June, is called Andrea WEBER. She was the originator of the registration of another Quebecer on two courses of Japanese pruning in next September in the North America Training Center. This charming person, obviously living in Quebec, in the beautiful region of Témiscamingue, I will add the photo of the handing-over of the tools set a little later. I will be only near Montreal in September and for now it’s a bit far … just for a picture !

But for the moment, here is her reaction on Facebook : 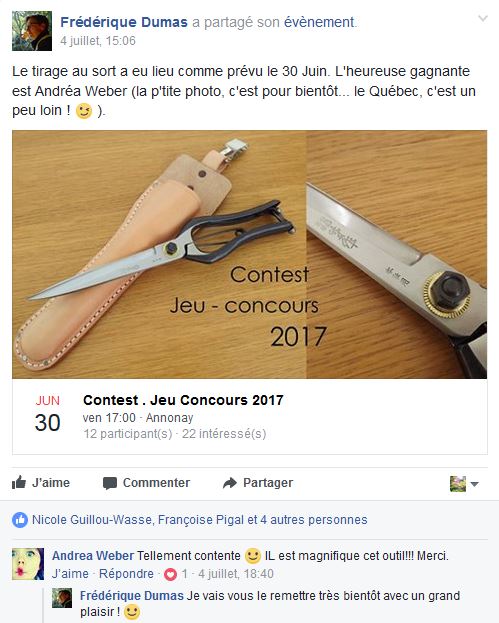