In fact, the foundations of the art of the Japanese garden, which is, by itself, a way of life of its own, based on endless concepts of harmony between man and nature. If we should have to sum up the Japanese garden in one sentence, what would this … A desire to live in total harmony with nature. 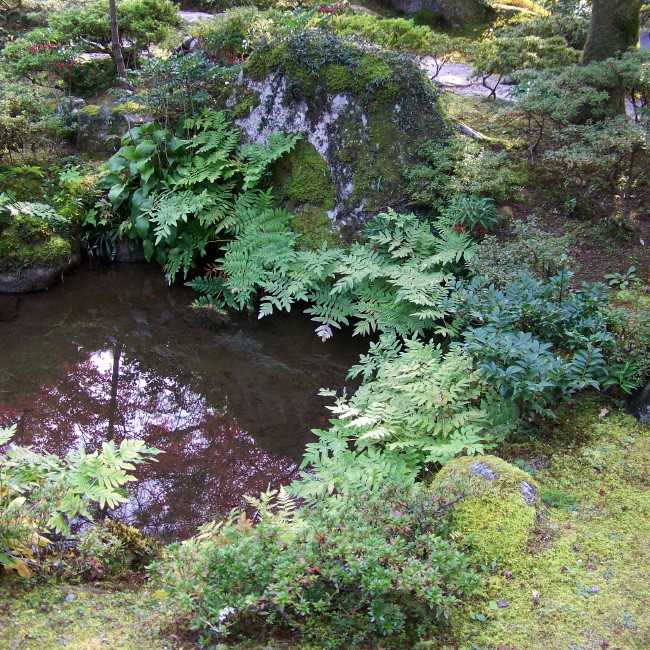 I agree with you … It is far from a simple basin and a lantern !

To realize more easily, simply fly briefly the evolution of the art of the Japanese garden.
– As far as we can go back in time, the Japanese garden is born around the year 300, with the tombs of dignitaries and Korean heads of war come to invade the southern half of Japan. They were built in enclosed spaces, consisting of gigantic mounds – kofun – decorated with pottery and other plant decorations, all surrounded by an enclosure.
– Just before 600s, Buddhism made ​​its appearance in Japan and has become the national religion, mingling with the beliefs of Shinto, a form of shamanism. It was at this time that appear the gardens-islands, representation of paradise and Buddhist symbol of spiritual elevation.
– 700s see the climax of the Chinese culture. To the essential elements – water, islands and mountains … – are added decorative elements – fountains and stone lanterns, bridges … – and the gardens become increasingly large, flowery and colorful, surrounding palaces, temples and shrines.

– From end of 700s until about 1200s, this art is refined and the end of this period see the development of a valuable book, the Sakutei-ki, for a very long reserved for insiders, which codifies among others, in fourteen different categories, the shape, space and representation of stones, the size and location of the pond, the form of its shores and islands, the orientation of the course of water therethrough … and hitherto transmitted orally, from teacher to student. The gardens are looking to reproduce exactly all of a natural landscape into every details to enhance the beauty of nature.
– The 1200s attend to the birth of Zen Buddhism, come from China, relying on austere discipline of life based on meditation, silence and self-knowledge. To find the essence of all things, he teach just as the reality of things that their emptiness. Its impact on art and life having been huge, so it greatly influences the art of gardening. Then appear stylized and uncluttered representations, accurate translations of this relentless pursuit, where islands and ponds are replaced and figured exclusively by white sand and stones, the vacuum is conducive to meditation.

– The beginning of 1300s sees a resumption of relations with China and the gardens will again change significantly. The spaces will be reduced and the gardens will extend to even the smallest spaces, that it can be enjoyed outside, but equally from the inside.
– The mid-1500s sees the development of the tea ceremony, which takes place in a small pavilion outside the house, accessed by a winding path in the garden, surrounded by lanterns and decorated with a stone basin necessary to the ablutions of purification, prior to the entry into the small tea house. It is, on the level of the garden, recreating in a small space, the peaceful quiet of a retreat in the mountain.

– The beginning of 1600s is characterized by a closure of the country on itself. The tea gardens will lose their primitive simplicity to blend in large gardens, luxurious and colorful with a new boardwalk style garden. Independent pavilions of the house are arranged around a large lake, trails linking them, creating a circuit walk. Dry gardens, tea gardens, islands gardens, stroll gardens and borrowed gardens are found simultaneously here. The garden art is then mainly based on aesthetic considerations, but keeps all its importance and its primary purpose in Zen Buddhist temples.
– At the end of 1800s, Japan abolished the feudal system and opens again on the world, adopting many western institutions. The art of garden also benefits from this opening, flower beds and lawn then appear there. It becomes a profession and no longer addresses only to insiders. Today, architects and designers, through modern adaptations of ancient traditions express the purest spirit in Japanese garden art, based on the criteria of simplicity and sophistication.

So, reduce the Japanese Garden only at “Zen” or any other religion is a big mistake. All these various religious currents have participate in its evolution and development, and have made of it that it is today. The Japanese garden arose well before the arrival of the “Zen” in Japan … If the art of setting stones, pruning trees or raking gravel seas seems often arise from “Zen”, just a thorough reading of Sakutei-ki allows to realize that this is the conversely, in fact, which has happened. It is through the creation of gardens along the old precepts that Zen Buddhist monks have found their ways to achieve enlightenment or satori, the expression of Oneself.