A little reminder to start. The term niwaki is not just to nominate trees with dense masses of vegetation poetically called “clouds” by the West and are distributed on both sides along the trunk of a tree. But this term niwaki means all trees of a garden from the time when man intervenes to guide them by pruning.

As for the Japanese pruning, it is used to reveal in a confined space such as the garden, the beauty of the tireless work of the various elements in nature. Or restore aesthetically closer to reality the characteristics of the essence of a tree and this which was broken, twisted, heavier, denser, reiterated…

And if the formation of “clouds” to characterize the forms of a heterogeneous canopy fully applies to softwood, the situation is quite different when it comes to most of the deciduous species. There is one in every case where it does not especially, there is that of “acer”, the maples. 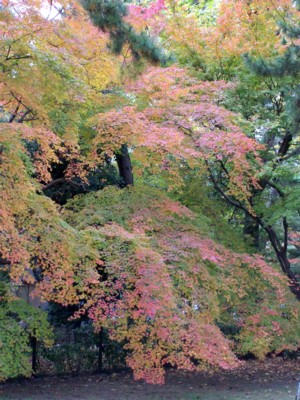 Their main characteristic is the lightness. A single layer of leaves on branches extending to touch the infinity… Create clouds and densification of the vegetation is simply an aberration. Again, this may be vegetable sculpture, but certainly not Japanese pruning.

A maple with “clouds” is something that in Japan, you’ll never see!